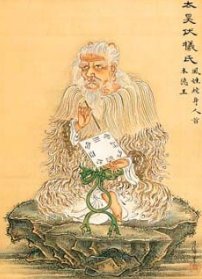 The Chinese tradition connects the invention of its writing in the name of Three big Ancestors - mythical emperors who would have cast foundation of the Chinese civilization.

The first one of them, Fuxi, in human head on a body of snake, would have reigned in the previous neolithic and taught the people - besides the art of the hunting, the fishing and the breeding - Eight Trigrammes, symbolic representations representing the aspects of the universe in movement.

To the successor of Fuxi, Shennong, the Chinese attribute the invention of a system of counting by means of knots on ropes.

The third is the Yellow emperor, Huang Di. According to legends, the group of Huang Di appeared from the highland plain in the north of Xi'an and became a well organized tribe. He thus crossed the Yellow river and settled down in the East.

Most of the histories written about Huang Di showed his multiple victorious battles. (Thanks to his invention: Zhinanche, the first compass of the world.)

It seems that he allied with another tribe leads by Yan Di to undo his enemy number one, Chi You. Yan Di had occupied sites in the plains of the North near the place of Huang Di, but he moved in the region of Xi'an. At least, Yan Di shares the same honor as Huang Di to be the illustrious ancestors of the Chinese, who become identified proudly as the descendants of yan and of Huang. 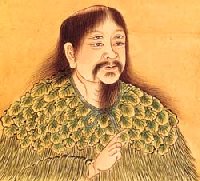 Huang Di is attached to the legend of the writing because it would be under his administration (in the middle of the IIIth millennium, according to the tradition) that Can Jie, his soothsayer, would have imagined Chinese characters, by observing the tracks of the paws of birds: endowed with two pairs of eyes, he could scrutinize the phenomena and the things beyond appearances and drill the secrets of the world. We also say that to the announcement of its invention, the gods trembled with fury.

So the writing, in the Chinese tradition, represents symbolically the mysteries of the cosmos.